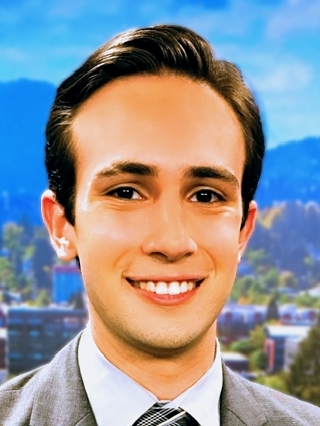 Perry Elyaderani was born and raised in Cleveland, Ohio before taking his trip across the country to his new home in Eugene, Oregon to work as an anchor and reporter for NBC16.

He graduated with degrees in journalism and chemistry from Elon University in 2018, where he conducted grant-funded research into male depression and suicidality on college campuses. In his time at school, he also anchored his school’s newscasts, worked as a studio engineer, picked up an odd preference for tie clips, and interned at ABC 7 in Los Angeles, ABC 11 in Raleigh/Durham, Cleveland 19, and Sarasota News Network. He has also served as a videographer, web designer and sales advisor.

He enjoys combining his passions for journalism, new media and science to produce meaningful content that benefits both his community and the general public. As he continues his career, he looks forward to expanding the scale of his research and storytelling to positively impact the world around him.

He’s always eager to hear from the community- feel free to reach out!