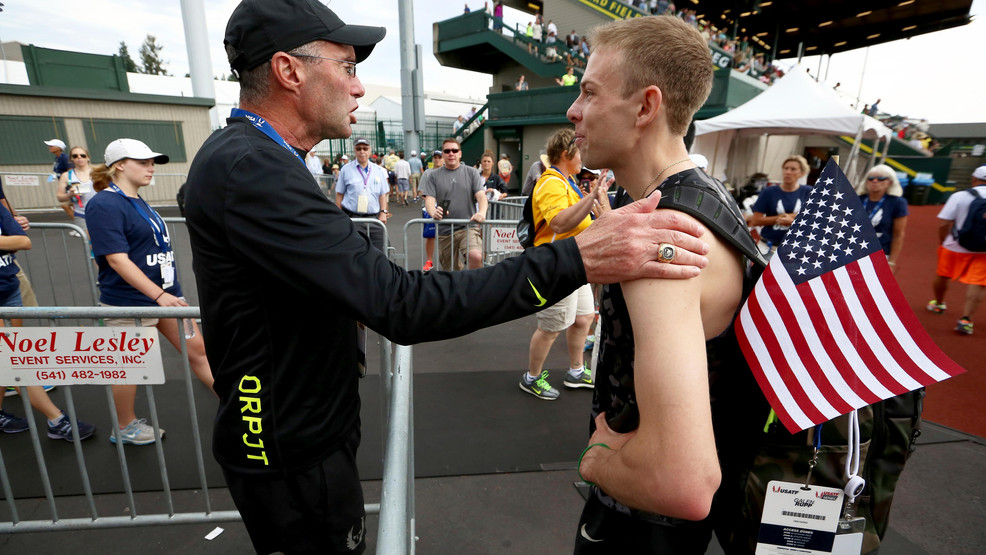 FILE - In this June 28, 2015, file photo, Alberto Salazar, left, and Galen Rupp talk at the U.S. track and field championships in Eugene, Ore. Salazar was excited about a performance-enhancing supplement he was trying out on his runners. The supplement ended up triggering a drawn-out investigation that led to Salazar’s four-year suspension from track and field. It was a remarkable comedown for America’s pre-eminent long-distance track coach, who helped Britain’s Mo Farah and America’s Galen Rupp win multiple Olympic medals. (AP Photo/Ryan Kang, File)

The International Olympic Committee will seek more information from the World Anti-Doping Agency about the long investigation by American officials which ended in Salazar’s four-year ban this week during the track world championships.

Salazar was removed on Tuesday from the track worlds in Doha, Qatar, where NOP runners have won two gold medals.

Bach was at the opening of the championships last weekend in the scandal-hit signature sport of the Summer Olympics.

Back in the Olympic home city, he said the Salazar evidence raised serious concerns including: “Could any Olympic results be affected, directly or indirectly?”

The IOC president did not identify any runners or races that could be implicated in the fallout from the initial USADA investigation.

The case relied on whistleblowers who once worked with Salazar’s team, though it is still unclear how much his athletes knew of their medication regimes.

Bach said the IOC sought information from WADA, including which athletes have been investigated and the scope of the evidence gathered.

“We are confident that WADA is looking into this anyway,” the German lawyer said.

After a two-day executive board meeting of the Olympic body, Bach’s news conference mostly dealt with doping scandals and ways to tackle possible drug cheats ahead of the 2020 Tokyo Olympics.

Bach said there was “no indication whatsoever” that Russian Olympic Committee officials were linked to alleged data tampering in the latest twist of a probe that has lasted as many years as the Salazar case.

WADA has set a deadline of next Wednesday for Russia to provide more information about why some long-sought data from the Moscow testing laboratory appeared to be altered.

The data was provided in January after years of being sealed by Russian legal authorities. WADA has said it could be evidence of possible doping in hundreds of cases involving Russian athletes.

Still, Bach’s assessment suggests the IOC will take little or no jurisdiction.

The IOC is looking to intervene to catch more dopers in future. Bach said he wants to extend the 10-year storage policy for samples taken during the Olympics _ for re-analyzing when improved tests are developed _ to also include samples taken several months before the games begin.

Talks with WADA and sports governing bodies will explore how to manage better storing the thousands of athlete samples involved.

“We think we can really have a stronger program and more deterrent,” Bach said.

_ Bach declined to speculate if the issues in Doha of low fan interest and high heat affecting athletes and event schedules would weigh against a future Olympic bid from the region.

“We don’t have any (expressions of) interest there from any city,” he said. In previous bid contests, the IOC ruled out a possible Qatari candidacy by insisting on a July-August window for the Summer Games.

_ Organizers of the 2020 Tokyo Olympics will contact sports governing bodies for advice and ideas to help combat high heat and humidity expected at the July 24-Aug. 9 games.

Artificial snow-making machines have been used to spray and cool spectators at test events in recent months.

“I find this quite creative,” Bach said.

Care facility in Eugene to test all residents, staff after positive COVID-19 test